What I learned from this year's FOSDEM

This year I participated #FOSDEM for the first time. FOSDEM is an annual conference of Free and Open Source Software (#FOSS) in Europe, which usually takes place at Brussels, Belgium.

Due to COVID-19 it took place completely online this year, and developers, programmers, lawyers, activists, and citizens like me gathered at chat rooms on #Matrix network, discussed and shared ideas on many themes related to FOSS, from how to write a code to how the free software movement should be progressed today. 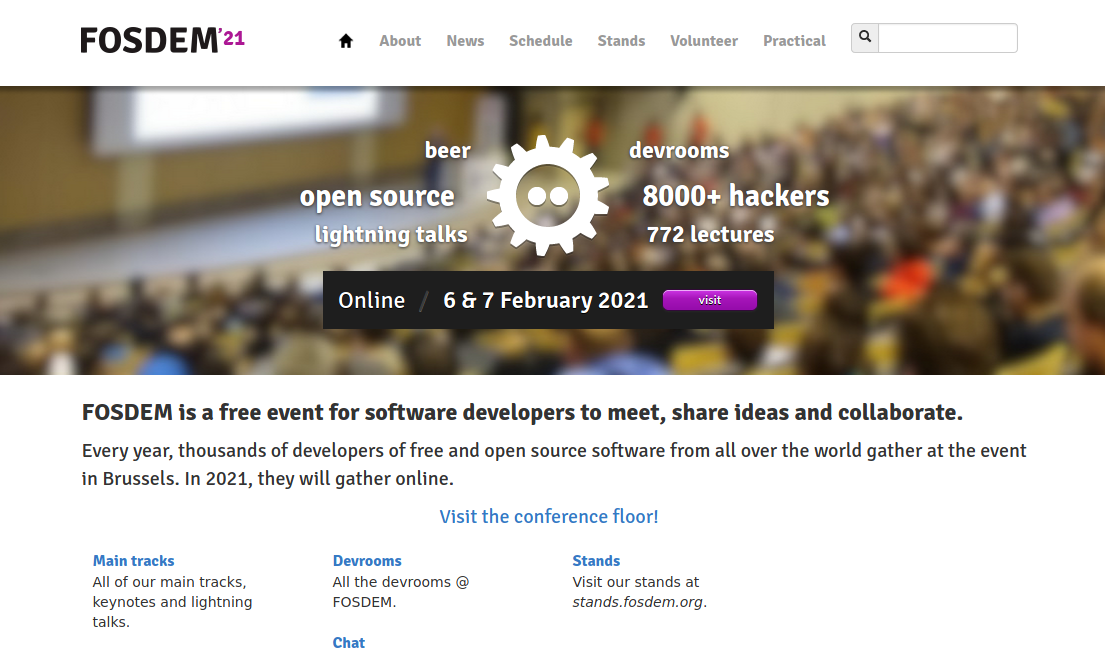 To be honest I have neither known the event nor heard of it until this year. It has taken place since 2000, but Brussels has been so far for me that I could not think about any events there except road races (FYI I am a huge fan of classic cycling races in Belgium).

It cannot be denied that free and open source software of Real Time Communication application such as Jitsi and Matrix removed the physical barrier (except the time difference) to meet someone over the world. RTC technology adoption certainly made possible to collaborate more efficiently over the world, which is a great advancement in the age of crisis. You do not have to travel across the world, which often costs a lot of money. This is one of the pros of the RTC technology because it effectively removes the burden for most of the people, especially in the developing world. Distance and cost are no longer a barrier to join the global community. If FOSDEM will take place with online RTC tools next year too, I will definitely participate again.

Many talks at FOSDEM 2021 were fantastic and I learned a lot of new things from them. Of my interest I especially enjoyed the lectures listed below:

Some were purely inspiring, for example The Death of Openness and Freedom? — Open Source Under Attack by Mr. Matt Yonkovit was quite enjoyable thanks to his sense of humor. The problem he discussed was serious though; thanks to “freemium” model free and open source software is becoming just a bait to acquire the market share and maintain the influence over the market. He took MongoDB as an example, but the same logic should be applied to Chromium for example, the core engine of Google Chrome which has been adopted by third party browser developers such as Brave Software. In reality they live on the Google's ecosystem and if Google shuts down the Chromium project altogether every project dependent on that will be in serious danger.

Still, due to my ignorance to programming the most precious lesson was maybe the way how speakers and participants talk about a theme together.

1. English is second language for most people; don't expect elegance

As you know Europe is a multi-national region where a lot of languages are spoken by many peoples. English is the native language of Britain, and on the continent, there is not a country whose native language was English. German, French, Spanish, Italian, Dutch, Danish, Polish, ... some of them are similar to English but others not. Many people accept the fact, and you are not required to speak an elegant English.

If you feel you would have to speak a nice English, you tend to expect the same level from those who are not a native speaker, and sometimes it would implicitly lead you to look down on others who cannot speak English quite well. Obviously, that is not a mature attitude to a person.

Let's not judge people based on how they speak because as always, thought matters. Respect others on their thoughts.

2. If you speak language which everyone can understand, it is fine

The hard fact is that you cannot tell your idea to most of the people if you only speak your national language. If you stick to your language, those who do not speak it cannot understand your thought even if they are trying to understand you on their good will.

If you want to communicate with them, you need to have a minimum ability for it, and if you do not have the ability, you need to work on that. However, don't aim at elegance or perfection, unless you are willing to be a politician. You are not expected to overwhelm others so that they worship you. If you are looking for collaboration or contributing to a project, you are expected to speak a language which everyone involved can understand, and that is enough.

It is an imaginary fiction that you could tell every bit of your idea to others. Regardless of what language you speak, others understand you on your expression, as you do. So the point is how to express your idea so that others can grasp the essence of it. Aim at the mutual understanding, instead of trying to tell your whole idea correctly because it is impossible from the start.